For unto you is born this day in the city of David a Savior, which is Christ the Lord.  Luke 2:11 KJV 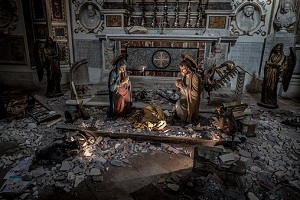 Imagine the scene of Jesus’ birth.

As the Son of our glorious God prepared to enter the world, no marching band celebrated it, and no special edition of the newspaper or CNN 24/7 television crew covered it. Nothing took place to herald the royal birth.

God sent His Son’s birth announcement through angels. Even then, God’s angels didn’t appear at Times Square in New York City, the site of universal celebration on New Year’s Eve. Nor did God send them to heads of state, kings, queens, or city mayors.

Rather, God selected a field less than a mile west of Bethlehem. The quiet countryside, dotted with sheep asleep for the night, lit up with blazing heavenly lights that pierced the darkness. Although God brought attention to His announcement of Jesus’ birth, He did so in the presence of flocks of sheep and the men who tended them, not in the presence of prominence.

God sent His Son as the ultimate sacrifice for the sins of everybody in the world, and He chose to share His news first with lowly citizenry. Perhaps God wanted to make sure the news was shared.

If God had chosen to give the news of His Son’s birth to the ruling class, they might have greedily hoarded the news to themselves, reasoning that only the elite deserved to hear such news.

Of course, God knew what He was doing when He gave the news flash to shepherds. They would appreciate the news and share it. The angels told the shepherds where they could find the new baby, but they didn’t command them to travel there. After the angels left, the shepherds discussed the news and hurriedly went to find Joseph, Mary, and the baby.

Sharing the story of Jesus’ birth and His saving grace is still important today. People the world over need to know Jesus came to earth to save them from their sins.

Take the challenge to spread the Good News.

Jo Huddleston is a multi-published author who writes novels inspired by her fascination with the 1950s and her love of her Native American South. Novels in her endearing Caney Creek series, her West Virginia Mountains series, as well as her stand-alone release, Tidewater Summer, are sweet Southern romance novels.  Jo’s devotions appear in eight anthologies, and she has written devotions on assignment and freelance for the following daily devotionals: Devotions, Open Windows, Pathways to God, The Quiet Hour, The Secret Place, and The Upper Room. Visit Jo at www.johuddleston.com where you can read first chapters of her novels and novellas.