You will find a baby wrapped in cloths and lying in a manger.  Luke 2:12b NIV 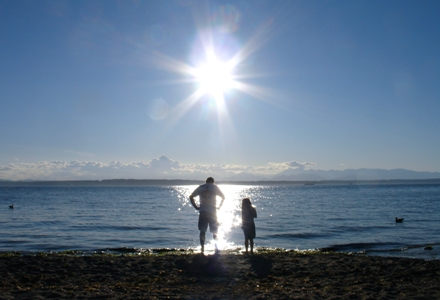 My husband walked a narrow, sand road in the African bush, our enormous Great Dane frolicking beside him. As they turned to go home, Carl noticed a small girl heading toward them. Panic showed through her huge brown eyes, turning her into a little pillar of fear unable to move or speak.

The child stared at the towering man and his lion-sized dog. They were so large and unfamiliar. So unlike her, the small and scared one. Was it safe to approach them?

Carl spoke gently to the frightened child. The terror in her eyes changed to joyful wonder, and she started walking again, moving closer rather than running away.

The difference? Carl spoke her language. In words she understood, he kindly told the little darling, “All is well. You are safe.”

Shepherds in the fields that first Christmas night were also frozen by fear. They didn’t expect to be surrounded by the towering glory of God, and they weren’t at all comfortable with a sky full of angels. The messenger of God spoke kindly to them, in their own language—the language of stables, feeding troughs, babies, and a long-promised Savior. Things they understood. The message was good news that turned their fear to wonder. Off they hurried to find the divine infant, God they could approach.

Sometimes I fear God’s bigness and righteousness. Unlike me—the small, scarred and scared one, He is greater and bigger. Do I dare approach Him? Yes. God speaks to me kindly and in a language I understand. He speaks through the person of Jesus who came to earth small but overcame death. The one who still carries scars and gives songs. My fear turns to wonder, and I move closer to Him.

To the Magi, God spoke of a King. To the shepherds of a barn and a baby. To me, of scars and songs. He speaks your language too, whatever it may be. Listen and approach in wonder.

(Photo courtesy of morguefile and kakisky.)

Debbie Ginder, writer and speaker, is a messenger of God’s grace. Her experience as a counselor, missionary, and pastor combines with her journey from abuse into a divinely-arranged marriage to produce heart-lifting stories and presentations. Her devotions have been published in The Upper Room and The Secret Place. Contact Debbie at ginderdeb@gmail.com.