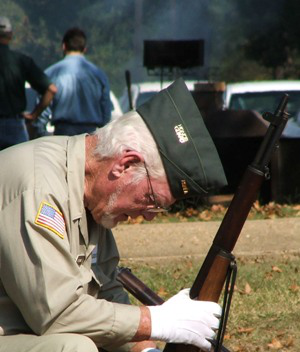 “You are now a gold star mother,” my son’s commanding officer said as she pinned the tiny gold star to my collar. “Thank you for being willing to sacrifice your son for the welfare of our country.”

I didn’t feel noble or patriotic; instead I was overwhelmed by our son’s death. During a bleak week in February, he left behind a heartbroken wife and three young daughters. After the flags and funeral, Lent began, a time of reflection and repentance seasoned by my family’s grief as we struggled with the aftermath of Matt’s PTSD.

On Maundy Thursday, my husband and I attended a communion service that focused on Jesus’ march to the cross. We passed around wreaths of thorns. I marveled over Mary’s submissive spirit. From the moment of conception to the crucifixion, Mary surrendered her will to the God’s plan. I knew that if anyone had tried to touch my sons and nail them to a cross, I would have clawed and kicked in their defense.

Did the treasures she had stored in her heart over His lifetime provide the strength she needed during those dark hours? I can only speculate that they and the promises from God’s Word about the Messiah sustained her faith. Like the disciple’s, Mary’s sorrow turned to praise when she learned about Jesus’ resurrection.

The hope that bubbled up from Easter Sunday and Christ’s resurrection fed my family as we waded through our grief. I know my faith will never match Mary’s, but I pray for a servant’s spirit that surrenders to God’s will in all situations. If I could, I would pin thousands of gold stars onto Mary’s robe and thank her for trusting God even when He sacrificed her Son.

Take time to reflect on the sacrifice God made for you.

Joan Donaldson’s latest novel, On Viney’s Mountain, represented the State of Tennessee at the 2010 National Book Festival. This year, her nonfiction articles appeared in MaryJane’s Farm and A Simple Life magazines. She co-leads a Kids’ Life Bible Club in the local elementary school and loves watching the children’s faces when she teaches them about Jesus.