Fully convinced that God is able to do whatever He promises.  Romans 4:21 NLT 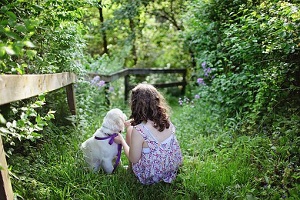 Everything was going as Eppie had planned.

Our granddaughter waited patiently by the family car. Her dad and her sister Rise were inside the house, preparing for their return trip to Vermont following a delightful Father’s Day weekend visit with the Delaware grandparents. Also safely inside was Willow, their nearly-grown golden retriever.

“I didn’t want the dog to come outside,” Eppie screamed angrily.

Rise’s jaw dropped as Willow pranced gleefully, but only briefly into the front yard. Eppie marched up to the carefree puppy and dragged her back to the house. Willow was too stunned to object or even eek out a slight “ruff.”

“That dog is stronger than you, Eppie. You can’t pull her by yourself.” As soon as Granddad uttered the words, he knew he had said the wrong thing to the four-year-old.

“No, she’s not. I’m stronger than she is,” erupted Eppie.

And Eppie proved it. Willow was back in the house in record time. Although her victory was won mainly by sheer tenacity and willpower, Eppie’s resolve speaks volumes. We must have the same determination and bulldog faith when the Enemy of our souls knocks on our door with sickness, fear, doubt, strife, lack, or condemnation.

Paul says God will do what He promises. Daniel opened the windows of his home and prayed unashamedly to his God despite the satrap’s evil plot against him. The three Hebrew youths refused to bow down to Nebuchadnezzar’s statue. Josiah pledged himself to the Lord and required the Israelites to do the same. Nehemiah’s team repaired the walls of Jerusalem though surrounded by enemy ridicule and threats.

These heroes of faith expected God to lead and protect them in the face of danger and death. We can be fully persuaded that God’s promises are “Yes” and “Amen.”

Even though life can be ruff, as Willow discovered, choose to believe God can do whatever He promises.

Nancy Zeller is from Delaware and loves spending time with her children and grandchildren. When she isn’t singing with her church’s music ministry, she trains caregivers to provide services for the elderly and adults with special needs.