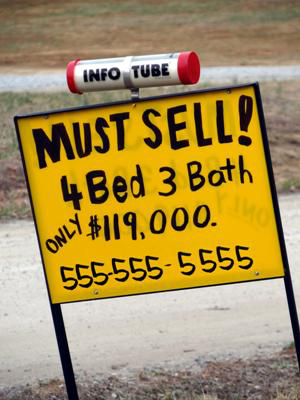 Six years ago, the Lord directed my husband to take a job transfer. This required a move with only four weeks’ notice – precious little time to prep our home of eleven years. However, without hesitation, we rented a home in the new location while continuing to pay the mortgage. We acted in faith, and the Lord provided. Our home sold in three months in spite of the economy taking a downward spiral.

When my husband neared retirement, the Lord impressed on our hearts to move to our childhood city to be near family. Once again, we found ourselves paying a mortgage on an empty home while paying rent in a new location. As before, the economy plummeted. Over the past six months, we’ve had two failed contracts. Recently, we entered a new contract, yet three times we received requests to extend the closing date for various reasons. I admit—I have questioned our Lord like the disciples did.

The disciples traveled the countryside with the Messiah. Twice they witnessed the miracle of Jesus multiplying a few loaves of bread and a couple of fish to feed thousands. Later, when traveling on a boat, they realized that they had just one loaf of bread left.

Hearing the disciple’s conversation, Jesus warned them to beware of the leaven of the Pharisees and Herod.

The disciples asked, “Is it because we have no bread?”

I can imagine Jesus releasing a sigh when He asked, “And do you not remember? When I broke the five loaves for the five thousand, how many baskets full of fragments did you take up?”

“Also, when I broke the seven for the four thousand, how many large baskets full of fragments did you take up?”

How quickly the disciples forgot what Jesus was capable of doing. Didn’t they understand that if Jesus could feed thousands He was able to feed those few with Him on the boat?

Why have I been fretting? Just as Jesus was in the boat with the disciples, He is in my current house transaction. I must remember that the Lord sold our home the first time; therefore, He will do it again.

Recall the miracles the Lord has done for you. Write them down. Then recognize that He has met your needs before and will do it again.

Shonda Savage encourages people to deepen their roots in Jesus Christ with both written and spoken messages. Shonda connects with her audience by sharing her personal tribulations and triumphs with Christ. She frequently ministers to those whose lives have been impacted by incarceration.