You intended to harm me, but God intended it for good.  Genesis 50:20a NIV 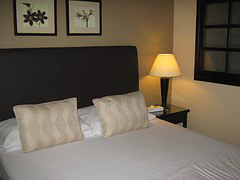 Even though my hotel door was unlocked, a quick perusal of the room revealed that my luggage was still there and my room hadn't been ransacked.

Ten thirty p.m. was approaching as I hobbled on aching feet to my hotel room. I'd had a full day of activities at a Christian conference near Philadelphia. But when I turned the latch on my room door, I discovered it was unlocked.

"Hello,” I called, gingerly opening the door a little farther.

I rushed to the front desk. “Please, I need to speak with the head of security,” I told the manager.

A uniformed man soon joined us, and I explained what had happened. The security chief escorted me to my room, inspected it, and declared it safe. “Looks like the cleaning staff left the door open as they were cleaning several rooms in this area. I’m sorry ma’am. Are you okay?”

“This is very disturbing,” I said.

The security chief agreed and promised to speak to the manager about making the night's stay complimentary. Ten minutes later, the manager called to tell me I would not be charged for that night.

From the moment I arrived in town for the conference, the enemy had been throwing fiery darts at me. His efforts were in vain, though, and God used the hotel incident—which could have caused me great harm—as a blessing.

But what if I hadn’t received a complimentary night’s stay? Or, even worse, what if I had walked in on intruders or had my belongings stolen? Would I still have quoted what the ill-treated Joseph said to his fearful brothers when he revealed his identity to them? I'd like to think so, but I’m not so sure. Finding good in adverse circumstances doesn’t come naturally to me.

When the Bible says God works all things together for good to those who love Him, the “all things” include both the positive and the not-so-positive. When something good, like a financial blessing, emerges after the devil’s attacks, rejoice. But also look for the good when the outcome appears negative.

Even when you can't see the good immediately, trust God that it's coming. He said it would.