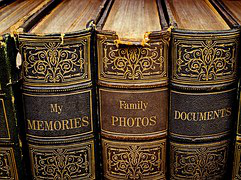 Pictures only let us see what we want them to.

We can tell a lot about one’s life by looking at photographs. Most subjects wear a smile. If someone glanced at my old photos, they would probably think I was the happiest person on the planet. But I can’t think of anyone who wants to capture or remember moments of despair. The essence of snapshots is to freeze time so we can look back at happy memories and pass those along to our loved ones.

As time passes and I glance at old photos, it’s not the conflicts I remember. Rather, it's the people who were with me during those times and how, with God’s help, they overcame the obstacles.

The Lord charged Joshua with the task of leading the Israelites across the Jordan River into the Promised Land—a feat requiring strength and courage. God would remove their enemies from the land. Priests carried the Ark of the Lord and led the way. As soon as their feet slipped into the Jordan River, the flowing waters were cut off, and the river stood up like a wall. After the people crossed the dry riverbed, the Lord told Joshua to place twelve memorial stones at the place where they crossed. When their descendants asked what the stones meant, the Israelites could tell the story of God’s power, presence, and promises.

We all occasionally pass through our Jordan Rivers. We’ll probably take a selfie before and after the crisis but most likely not while we’re in the middle of it. Hard times build our character and make us who we are. When we don’t see a way out, God will pull us through. And when we make it to the other side, we may look a little run down. Our knees might be a little beaten up, but our testimony will be worth telling to our children—a story of a good Father who delivered us into our promised land.

When you feel weak from battling trials, rely on God’s strength.

Dianna Owens is a blogger and reaches out to the community through a women’s ministry, Ignite 2 Ignite. She has been published in Living Real Magazine, Precious, Precocious Moments, and Reach Out Columbia. Dianna is a full-time single mom to a ten-year-old boy and a five-year-old daughter.  She resides in Lexington, South Carolina. You can find her journaling on her blog at www.diannaowens.com.