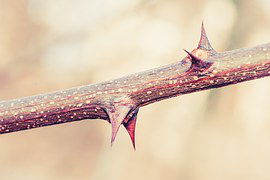 Hiking and backpacking had become a love I pursued monthly. But I wanted more. My daughter would soon be out of school for spring break. What better way to spend the week than hiking a remote section of the Foothills Trail which meanders along the South Carolina/North Carolina border.

My mistake was wearing a new pair of boots. Halfway through our first day of hiking, a burning sensation grabbed at the side of my heel. We stopped at the first cool stream of water so I could investigate. The culprit was a large blister. I cleansed the area, applied antibiotic cream, covered it with a bandage, and moved on. This thorn on my foot required daily care for the remainder of the hike.

Paul was a great apostle, but he had a thorn. Theologians conjecture what it was, but Paul leaves the answer as a mystery. What it was isn’t as important as how he responded to it. His actions are noteworthy when dealing with our own thorns.

Paul identified his thorn—not to us, but to himself. I knew what mine was as well. Soldiers in battle must identify the enemy before they can fight him.

Though it’s not recorded in Scripture, it’s feasible to imagine that Paul asked God why he had the thorn. Asking God a question and questioning God are different. The first is permissible; the second questionable. God may choose to reveal why—or He may keep it a secret. I knew why I had the blister.

Paul asked God to remove the thorn. I would have loved for God to miraculously heal my blister, but I doubted that would happen until I took the boots off. God didn’t take Paul’s thorn away either. Paul’s thorn had a purpose; my blister did as well.

When God refused to remove Paul’s thorn, Paul made peace with his thorn. I did with my blister. I doctored it daily because I knew the risk of infection. Paul was obviously tempted to have a prideful spirit—since he concluded God gave the thorn to keep him humble.

God has a purpose when assigning thorns. If and when you get yours, rather than complaining, ask God what He’s attempting to teach you.