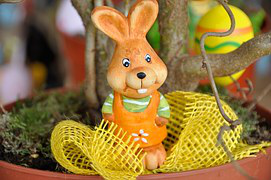 Easter baskets full of candy, going to church, eating with family. What, after all, is the big deal about Easter?

God came to earth born as a man and then spent three intense years of ministry. While here, Jesus trained a team of twelve men to carry on His work after He left. He taught us how to live in godly righteousness and promised eternal life. Amazingly, folks wrote down His words, and the Bible now serves as a love letter from God given through Jesus.

But we seem to know better. We often don’t want a spiritual king who doesn’t speak of wealth and luscious desires of the flesh like our human kings do. A king like this gets in the way. So we cry, “Get rid of Him,” “Stone Him,” “Whip Him,” “Nail Him to a cross,” or “Humiliate Him.” When He responds, “It is finished,” we think He is off His rocker. Especially at the end when He asks God to forgive those crucifying Him.

Then hysterical women say Jesus’ tomb is empty, and we wonder where the body of Him who called himself the King of the Jews is? The body of that lunatic who said He was God. And then we hear of Him reappearing to the faithful with promises of life everlasting.

But it is true, and that’s the big deal about Easter. God loves us so much that He gave His only begotten Son so that when we believe in Him we will have eternal life with Him (John 3:16). Jesus’ agonizing death on the cross drew the line in the sand, wiping clean the blood-red sins of those who believe in Him and making them lily white.

Because of Easter, when we look in the mirror, we can see a new being washed by Jesus’ blood, loved as His child, and filled with the joy only He can bring.

Forget about the bunny! Pick up your Bible and go forth as a mighty resurrection Christian.

Barbara Duncan is a child of God who enjoys sharing her Christian faith with other folks. She is a licensed pastor serving in a small Pennsylvania church and a retired high school English teacher.  Precious Pearls of Faith, her second published work, was born out of her desire to share thoughts on faith with those who might have the same questions she does and the same desires to explore our beliefs in Jesus Christ.