The talk of fools is a rod for their backs, but the words of the wise keep them out of trouble.  Proverbs 14:3 NLT 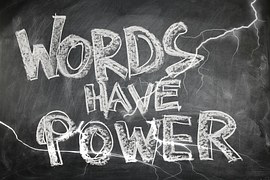 The assignment was simple. Students were to write a short paper detailing three things they felt strongly about. When all were finished, I collected the papers and redistributed them to their peers to check for grammatical errors, redundancy, and wordiness.

One young lady approached my desk. “Doesn’t this sentence say the same as the previous one,” she asked.

A short time later, she returned again, “Doesn’t this sentence say the same thing too?”

With a confused look and a sigh, she whispered, “But that only leaves one sentence in the entire paragraph.”

I shook my head and smiled, then called the class to attention, “Class, life lesson. Sometimes, when we think we have a lot to say, we have very little.” The student—whose paper was in question—laughed, but I was convicted.

Many are the warnings God gives throughout the Bible with outright instruction or example about the potency of our words. Taking into consideration those warnings—and noticing that I have two ears but only one mouth—I’ve concluded it’s better to listen more than I talk. I’ll learn more, stay out of trouble, and develop healthier relationships.

The classroom exercise also reminded me of how crucial it is to choose carefully the words I write or speak. Since wordiness and redundancy are rife, I need to make sure the words I give out are worth listening to. Saying the most in the fewest words is challenging and requires forethought, but is possible.

Since people’s attention spans are growing increasingly shorter, speaking or writing with as few words as possible is wise. Otherwise, I’ll lose those tp whom I think I have something to say.

Words also reflect my character—the person I really am on the inside. I have a sneaky suspicion the young student was attempting to take a shortcut. Since I require a minimum of five sentences in a paragraph, he was shooting for the goal rather than truly thinking about what he felt strongly about. His attempt was foiled by a student with a watchful eye.

Make sure the words you deliver are worth listening to.