I have fought the good fight, I have finished the race, I have kept the faith.  2 Timothy 4:7 NKJV 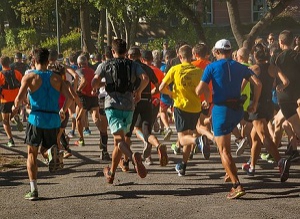 Some will finish the race well; others will not.

Cliff Young, a sixty-one-year-old farmer from Australia, entered the 544-mile inaugural Sydney to Melbourne Ultramarathon Race in 1983. He showed up for the race wearing overalls, a white t-shirt, and work boots. The other runners wore promotional running attire. They laughed and made fun of him.

At the end of the race on the fifth day, no one laughed. Cliff won the race with a ten-hour lead. When asked how he trained for the marathon, he said he had once run for three days straight chasing and herding his sheep. The key to his success was to keep running when the other runners stopped to rest.

The apostle Paul lived well, ran well, and finished well. He instructed his young disciple Timothy to be a soldier and not to get entangled in the affairs of this world (2 Timothy 2:4).

We can learn a lot from Cliff Young. His whole life prepared him for this race. As Christians, preparation is the key to finishing well. Early every morning, when others are asleep, we can rise to feast on God’s Word and bask in His presence. We can have the mindset of a soldier, not a tourist.

God has called us to a battle, not a picnic. We need to put on the armor of God because our conflict is with the enemy of our souls. When others are distracted by the cares of this world, we can get on our knees and pray for a sick and dying world.

Like Cliff Young, when others quit, we must keep running. When the race seems long and hard, fix your eyes on the prize: the Lord Jesus. He is just across the finish line.

Fight the good fight, finish the race, and keep the faith.