He tends his flock like a shepherd: He gathers the lambs in his arms and carries them close to his heart; he gently leads those that have young.  Isaiah 40:11 NIV 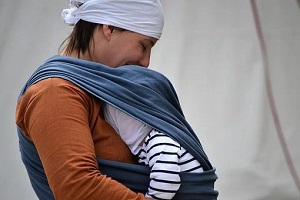 “You need a baby ring sling,” I said.

My neighbor runs a daycare. She has a sweet baby to tend, but often Zoey is quite fussy and wants to be held. My friend holds her, but doing so ties her hands. One day when I visited Amy, she said, “I can’t fold laundry, I can’t do dishes, and I can’t mop.”

That weekend I made her a baby sling and delivered it Monday morning. We worked at putting it on correctly. I did a trial run while she held Zoey, and then Amy slipped it on, and I helped her put Zoey into the sling and get her comfortably secure.

Suddenly, two grown women danced around the kitchen with jubilation. Amy threw her hands in the air and sang, “I’m free!” Zoey rested against Amy’s chest and fell asleep shortly thereafter. Not only were Amy’s hands free, but the sling also distributed the child’s weight and made Amy’s back less stressed.

I reflected on that happy event during my devotions the next morning, thinking about how my Shepherd King wraps His loving arms around me and carries my burdens. He is my sling.

I read a story once about a man who trudged along a country road with a heavy burden on his back. A farmer came by with a horse and wagon, slowed, and asked the man if he would like a ride to town. The tired fellow gladly accepted and hoisted himself onto the back of the wagon.

After a while, the farmer glanced back and noticed the man still had the burden on his back. He shouted, “Why don’t you take off your pack and rest?”

His passenger replied, “Oh, no, sir. You’ve been so kind to give me a lift. I wouldn’t think of asking you to carry my backpack too.”

Kind of silly, but sometimes we do the same. The Lord promises to carry our burdens, but we often hang on to them. Peter tells us to cast all our cares on Him, because He cares for us (1 Peter 5:7). By faith, I plan to let God be my burden bearer.

How can you do a better job of letting God carry your burdens?

Ginny Merritt lives with her husband Ray in a small New York town on the Erie Canal. They recently retired from thirty-four years in the ministry. They are renovating a home built around 1860 and are enjoying being closer to their daughter, son, and two grandsons. Ginny has published two books through Journeyforth, a division of BJU Press: an early reader chapter book, A Ram for Isaac, and a children’s novel, The Window in the Wall.