No one will be able to stand against you all the days of your life. As I was with Moses, so I will be with you; I will never leave you nor forsake you. Be strong and courageous, because you will lead these people to inherit the land I swore to their ancestors to give them.  Joshua 1:5-6 NIV 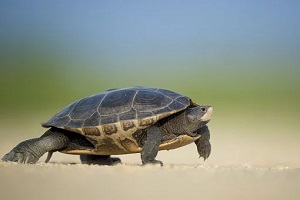 The little box turtle crept across the four-lane highway, attempting to reach the other side.

I watched him crawl across the second lane and believe he reached the grassy median. But I have no idea whether he completed his journey. That turtle faced the oncoming traffic to fight his way across what must have looked like a vast expanse to him.

Too many times in my life I've faced four-lane highways. I've either had to summon courage or chicken out. So did God's servant Joshua. As the predecessor of Moses, God called Joshua to fill some big shoes. Moses had groomed him and encouraged him, yet Joshua didn't always get it right.

Despite Joshua’s failed attempts at going for the win on his own, God continued to call him to be strong and courageous. When he obeyed, miracles happened. As Joshua chose to listen to God and put on his courage and strength, he led the Israelites into the Promised Land and the walls of Jericho fell. With courage and strength given by God, Joshua moved his people forward.

God gave Joshua three directives: be strong and courageous, be obedient to God, and continually read and study the Bible, God's formula for success. Maybe not the world's way, but God's way. Our Father wants us to be brave, pray, listen, and study His Word. Then we can tap into the courage and strength He offers. God is with us as we journey the vast expanse called life. He will not leave us—if we embrace Him.

Make it a habit to seek God’s courage and strength every day.

Penny Frost McGinnis writes devotions, book reviews, and thoughtful posts on her blog, Hope for Today's Heart, at www.pennyfrostmcginnis.com. Blessed with five children and eleven grandchildren, she and her husband live in southwest Ohio. Retired from working in libraries, she enjoys spending time with family, reading, writing, nature, and traveling to Lake Erie. She believes God has called her to bring hope and joy to people's lives through her writing.