For God so loved the world that he gave his one and only Son, that whoever believes in him shall not perish but have eternal life.  John 3:16 NIV 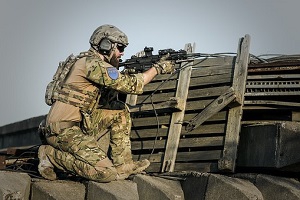 With slow steps and emotional pain in his heart, Chaplain Scott, along with the commanding officer, approached the front door of the house.

The chaplain prayed a silent prayer for the right words of comfort as he entered the home. The men introduced themselves to the parents and compassionately informed them their son had been killed in battle. The father fell to his knees in anguish, grabbed Chaplain Scott’s hand, and wailed, “He was my only son!”

The young soldier had been a Christian and spoken openly of his faith. On the night before his death, he had told his fellow soldiers about his trust in Jesus Christ. He was aware of the possibility of meeting death on the battlefield, but he was prepared to die if necessary.

God knows the heartache the father experienced. His only Son was also killed. Jesus Christ was aware as He walked toward Jerusalem that each step took Him closer to death—yet He walked steadfastly onward. “As the time approached for him to be taken up to heaven, Jesus resolutely set out for Jerusalem” (Luke 9:51). He had come to earth to fulfill His Father’s plan, and He would see it to its completion.

The young man died to preserve his country’s freedom. Jesus Christ died to give the freedom of salvation to all who choose to accept Him as Lord and Savior. God gives each individual free will to make a decision concerning salvation. He longs for us to accept the eternal life His Son died to give, but He does not force His will upon us.

What decision have you made about God’s only Son?