The Parable of Grace

For the kingdom of heaven is like a landowner who went out early in the morning to hire laborers for his vineyard.  Matthew 20:1 NKJV 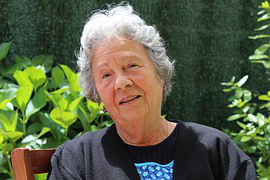 Although I witnessed to my mother often, she wasn’t interested in giving her life to Jesus Christ.

My mother lived just past her eighty-fifth birthday. Though terrified of dying, she refused to accept Christ. Several pastors spoke with her about eternal life, friends witnessed to her, and she read daily devotionals and attended church occasionally, but when her health began to decline, she still wasn’t interested in making a decision about eternity. One week before she died, my pastor visited her, read Psalm 23, and asked if she would like to receive Christ. She did. At eighty-five, she received the same amount of grace I received when I accepted Christ as a teenager.

Matthew 20:1-16 is known as “The Parable of the Workers in the Vineyard.”  A landowner left one morning to hire laborers for his vineyard. They agreed on payment of a denarius. The landowner went out again at the third, sixth, ninth, and eleventh hours to hire additional laborers, promising them they would be paid “whatever was right.” At day’s end, the landowner asked his steward to call in the laborers and pay them, beginning with those hired last. All were paid a denarius, regardless of what time they started working.

The landowner represents God, the vineyard His kingdom, the laborers believers, and the steward Jesus Christ. The parable teaches salvation is not earned. Our good deeds, years of service, age, or station in life aren’t a part of the calculation. No partiality. No seniority. Salvation is God’s gift. One day, God will tarry no longer, and our work on earth will be done.

Use every opportunity to share the hope that is in you while there is still time.

Angie Davis is the author of Come to the Light, a daily devotional book. She has had devotionals appear in Penned from the Heart, Daily Devotions for the Deaf, and Mustard Seed Ministries. In addition to writing, she enjoys reading, walking, traveling, and spending time with family and friends. Angie lives in Columbus, Ohio, where her family also resides. She can be followed at  www.angeladavisdevotions.com or contacted at aldavis@columbus.rr.com.