The Best for Last 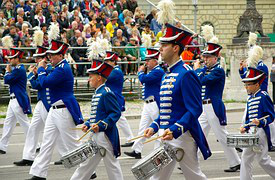 As a child, I loved going to holiday parades.

At parades, my brother and I would sit on the edge of the sidewalk and watch with excitement as different groups marched by. Military and school bands, dressed in a variety of uniforms, kept in step as they serenaded the crowd. Local scout troops marched behind their leaders, and decorated floats added a special touch to the festivities. Fire engines and police cars passed by, polished to perfection. Vendors sold candy, ice cream, and soda—a refreshing treat in the hot sun. The parade lasted three hours and ended with a spectacular float display. The committee saved the best for last.

On Good Friday, people lined the streets as Jesus walked the road to Calvary. But unlike the happy crowd at a parade, many were mourning and lamenting. Others shouted obscenities. Instead of a precision march, Jesus struggled beneath the weight of the cross. He had no fancy uniform, just tattered clothes covering His bloody, whip-stained body.

Instead of a victory celebration at the end, Jesus’ executioners brutally nailed Him to the cross. Instead of a cool drink to quench His thirst, they offered Him vinegar. Rather than applauding, as parade watchers do, the crowd cast lots for His garments and sneered at Him, saying, “If you are the King of the Jews, save yourself.” Little did they know they were fulfilling God’s plan.

Like my childhood parade that lasted three hours and ended with a special attraction, the crucifixion also lasted three hours. But the finale did not occur immediately. Three days later, the most spectacular event of all time took place—the resurrection. Like the parade committee, God saved the best for last.

Think of ways to tell others about the gospel so that none will be lost.

Frances Gregory Pasch’s devotions and poems have been published hundreds of times in devotional booklets, magazines, and Sunday School papers since 1985. She has been leading a women Christian writers’ group since 1991. Her book, Double Vision: Seeing God in Everyday Life Through Devotions and Poetry, was recently published by Lighthouse Publishing of the Carolinas. Frances has been married to her husband Jim since 1958. They have five sons and nine grandchildren. Contact her at www.francesgregorypasch.com.