A Sprinkle of Salt

Let your speech always be with grace, seasoned, as it were, with salt, so that you may know how you should respond to each person.  Colossians 4:6 NASB 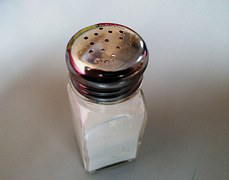 Salt on an ice cream cone is not on my list of Top Ten Favorite Foods.

My sister-in-law, Chris, and I walked across the hot plaza parking lot to a McDonald’s. She had an ice cream cone in mind. The clerk was sullen and gave us no eye contact when we ordered. But I noticed the unusual name on her tag—something like Denisethia.

I tried to pronounce her name and asked if I was correct. I received a mere nod. Then I commented on how pretty it was and received a hint of a smile. Still no eye contact.

I laughed and asked, “Do people have a hard time spelling your name?” She was more verbal but still sullen.

“Oh, yes,” she replied, “I gave up a long time ago on anyone getting it right.”

I told her we had named our daughter Ann Elyse and, as a youth, she had kept a plastic box with strips of paper, recording the different ways people had spelled it.

Finally the clerk was engaged. Standing at the ice cream dispenser, she looked over her shoulder at me and said, “That’s a pretty name. How do you spell it?”

“Pretty name. Where did you get it?”

Now she was at the counter, handing Chris her cone and looking right at us.

“We got it from a movie that God used to turn us around to Him,” I replied as I circled my finger 360 degrees. Her face lit up and we got a big smile. Salt sprinkled … demeanor changed … 360 degrees.

She said a friendly “Good-bye” as we left the shop.

Paul tells us to sprinkle our conversation with salt. Sometimes that seasoning may fall in an unanticipated spot. But the results of this seasoning are left to the work of the gentle Holy Chef.

Ginny Merritt lives with her husband Ray in a small New York town on the Erie Canal. They recently retired from thirty-four years in the ministry. They are renovating a home built around 1860 and are enjoying being closer to their daughter, son, and two grandsons. Ginny has published two books through Journeyforth, a division of BJU Press: an early reader chapter book, A Ram for Isaac, and a children’s novel, The Window in the Wall.