Is not this the carpenter's son? Is not his mother called Mary?  Matthew 13:55 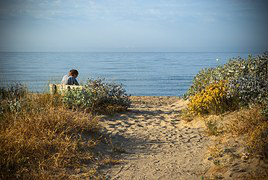 I would treasure something Joseph built.

I think of Joseph, Jesus’ earthly father, as a patient man. He was a carpenter. By trade, his work required meticulous effort if done well. When he made furniture or toys for the neighborhood children, I imagine him attending to each meticulous detail.

Joseph must have spent hours sanding the wooden surfaces to perfection and redoing corners so they matched. He surely became weary but labored until he finished an undertaking.

I see Joseph’s patience with Mary. During his engagement period to her, “she was found with child of the Holy Ghost” (Matt. 1:18). He could have reacted in any number of ways to this news. Many men would have exploded with accusations against her apparent immoral behavior.

Joseph knew he wasn’t the father of the child Mary carried. His response to the news was wrapped in his compassion for her. He didn’t want her to face public judgment and stoning if this news became known in their community. He would sign the necessary legal papers to quietly dissolve their engagement.

As Joseph considered the situation, an angel appeared to him in a dream and confirmed the imminent birth of Jesus. The angel told him Mary’s conception was from the Holy Spirit. He was not to be afraid to take Mary as his wife, and they were to name the child Jesus. Waking from his dream, Joseph obeyed.

At times we may wish for an angel to appear and address us personally with a message from God. If we could only receive concrete proof about God’s instructions for us, then we could find it easier to react as Joseph did: with patience in troubling situations and obedience to God.

Ask God for Joseph’s patience, compassion, and obedience as you prepare for the celebration of Jesus’ birth—the Savior of the world.

Jo Huddleston is a multi-published author who writes novels inspired by her fascination with the 1950s and her love of her Native American South. Novels in her endearing Caney Creek series, her West Virginia Mountains series, as well as her stand-alone release, Tidewater Summer, are sweet Southern romance novels.  Jo’s devotions appear in eight anthologies, and she has written devotions on assignment and freelance for the following daily devotionals: Devotions, Open Windows, Pathways to God, The Quiet Hour, The Secret Place, and The Upper Room. Visit Jo at www.johuddleston.com where you can read first chapters of her novels and novellas.