I look up to the mountains—does my help come from there? My help comes from the Lord, who made heaven and earth!  Psalms 121:1-2 NLT 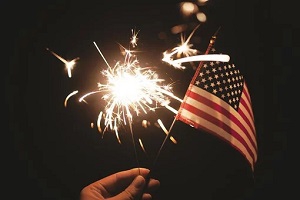 As we celebrate America’s birth, we should consider the man most responsible for its formation: George Washington.

Tradition says he included “So help me God” in his presidential oath of office. Whether he did or not, he demonstrated the meaning behind this expression in his life. Washington was a godly man. After taking the oath of office with his hand on the Bible, he kissed it. He set a righteous example as he discouraged cursing among his officers. God raised this man up and preserved him.

In the French and Indian War, a Native American chief fighting against Washington was awed by his invincibility. After one battle, Washington had four bullets lodged in his coat and two horses shot out from under him—with hardly a wound. Although he led from the front rather than the rear as most generals did, he avoided death. This chief, convinced that the “Great Spirit” had preserved Washington, prophesized that “he will become the chief of nations, and a people yet unborn, will hail him as a father of a mighty empire!”

Sadly, Congress decided to remove “So help me God” from the President’s oath of office. Also, Christ Church in Alexandria, Virginia, where Washington attended while he was President, removed a commemorative plaque because of his ties to slavery. Washington was not a perfect man, but he did a great deal for our nation.

America’s existence can only be explained by God’s providence—not her wealth or might, although God has given her both. Her existence is due to men and women coming to her shores, seeking freedom to worship their Creator as their consciences dictated. And God did not disappoint them.

If we remove the collective consciousness by which this nation was formed through the intervention of a divine hand—using good but imperfect people who are inadequate in themselves and therefore need wisdom from heaven to continue this experiment in democracy—America will crumble.

Pray that Americans will always remember their origins.