Christ Jesus came into the world to save sinners; of whom I am chief.  1 Timothy 1:15b KJV 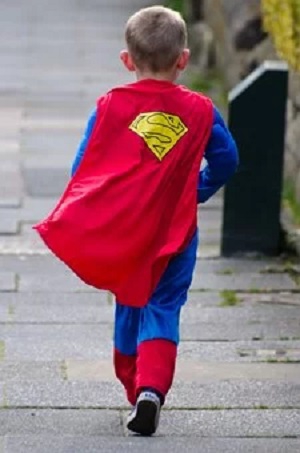 I smelled rubber as the sedan screeched to a halt.

With legs sprawled, and palms stretched wide, my three-year-old son stood in front of the car with an expression of delight. How had he slipped his hand out of mine? I scooped him into my arm, tightened my grip on my daughter’s hand, and apologized to the driver.

Once inside the store, I asked, “Son, what were you thinking?”

“I’m Superman! I stop car!” My son flexed his muscles to demonstrate his power.

“That was neat,” my daughter said.

“Not exactly,” I said, knowing we would discuss street safety later. I’ll shelve the super hero videos for now, I thought, but I knew that would be futile.

To my three-and-four-year-old children, super heroes were as real as Charlotte the spider who lived on the porch—and I was not permitted to sweep her web away in case she wanted to write a message. The Easter Bunny lived in the neighborhood—my children had seen him. Pretty soon, Gilligan would teach my children boating skills—as soon as he got off the island. And Mr. Rogers would bring Lady Elaine and Daniel for a visit soon.

Super heroes empower children. With their imagination activated, they envision the world as a safe place to grow, learn, and play. Once we become adults, we lose that safety-net of knowing there is a super-power greater than ourselves … or do we?

With faith activated, we can know the One who is more majestic than any imaginary Super Hero and whose name is mightier than any name that is named. Jesus Christ is our Super Hero—the One who carries our fears so we don’t have to. He is the One who activates dreams—those we gave up on achieving. He is the One who provides bread on our table when the mortgage is due and the dollars are few.

Although Paul sinned, he knew Christ’s transforming power. Christ was his Super Hero.

We can thank our Super Hero Jesus Christ as eloquently as Paul did. God has placed within us the indelible gift of imagination. As we pray, we can envision with childlike faith just how majestic our real-life Super Hero truly is.

Ask God to help you envision Jesus Christ in His majesty.