And if you give even a cup of cold water to one of the least of my followers, you will surely be rewarded.  Matthew 10:42 NLT 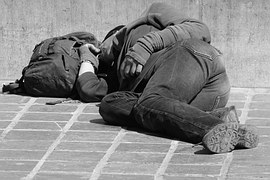 Broken people are everywhere—racked by the tormenting side effects of drugs and left hurt and bleeding by people who promised to “love and cherish” them.

She was there the other night—the drugged-out lady at the local park who babbles incoherently and laughs eerily at nothing in particular. I knew she wasn’t a threat, but her spaced-out eyes and stumbling ways left me feeling helpless to reach out to her.

But that night the Holy Spirit did not whisper with a still, small voice. He called sharply. Leaning hard on a power that wasn’t my own, I started toward her with quick determined steps. I’m not running away this time! I sat on the park bench with my hand across her shoulder, drawing her closer. She may not have understood, but God’s power supersedes human inabilities. I prayed for her, and then she left. I’m not afraid of her anymore.

As I stepped off a bus in Baltimore a few weeks later, I saw a piled mass of blankets and backpacks. Looking closer, I saw a man—face buried deeply in a heavy winter coat. Everything he possessed was cluttered around him as he slept in spite of the street noise. No one thought about or looked twice at him. This person with pulse beating and lungs inhaling was alive—and yet somehow he wasn’t.

These were the people Jesus stopped for along the road or on His way into the temple. He touched untouchable lepers. He crossed the line of what was culturally acceptable by ministering to a Samaritan woman. And He gave the hungry more than food. He offered a hope-filled, grace-drenched, turned-around new life. He cared about their physical limitations and pains, but it was ultimately their soul He sought to minister to.

Regardless of whether we are a destitute beggar or wearing Armani on Wall Street, Jesus sees through it all, and in the end we all have the same need: a Savior.

Without Jesus and the hope of eternity with Him in heaven, we would all be homeless too.

Samantha Trenkamp hails from the rolling hills of East Tennessee where she lives with her family. After having served for two years as a staff writer/proofreader for Daughters of Promise magazine, she is now looking forward to going to school for her B.A. in creative writing.