Greatness in the Kingdom

Like the Son of Man, who did not come to be served, but to serve and to give his life to redeem many people.  Matthew 20:28 GNB 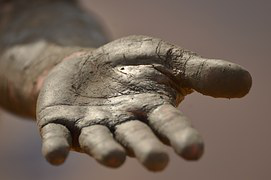 Power is adorable—and intoxicating at the same time.

Several years ago, I was given an opportunity to lead a prayer session in my church. I didn’t know much about how to do it—and I don’t like facing a crowd—but I accepted the invitation and led the prayer. God chose to honor my prayer, and the atmosphere was awesome. Miracles were everywhere.

Following the prayer, one of the ministers saluted me for a job well done. The compliment meant a lot to me because I had just given my life to Christ. After that day, I began to walk around like an anointed man of God. I expected praise and salutation from the church members, but I got the opposite. I was angry for a while until the Holy Spirit opened my eyes.

We all want the seat that comes with authority—to be cheered by the crowd. In those moments, we believe we are doing great things. But that is not greatness in the kingdom of heaven. True greatness means serving others with humility, just as Jesus humbly died for us so we can live and be redeemed.

Giving orders to people does not make a person great. Nor does being in a top position. Helping others to achieve their goals in humility is the great work God requires. The world doesn’t serve people; it only extols them. The emblem of every believer is to serve humanity with our gifts, time, and resources.

We are only great in God’s eyes when we help others reach their potential without expecting anything in return.

Adedeji Adewunmi is a Christian freelance writer living in Nigeria. He works with various ministries to win souls for Christ. He loves meeting people and enjoys working as a team. He also enjoys telling people about his faith because it is the most important thing in his life.