The Jebusites taunted David, saying, 'You'll never get in here! Even the blind and lame could keep you out!"  2 Samuel 5:6 NLT 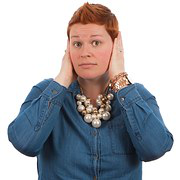 When I was a teenager, I heard voices.

“Let’s get drunk,” said the first voice. The 1970s were in full force. Drinking seemed to be a way of life, so I agreed. And since this voice represented acceptance by my peers, I justified my listening.

“Let’s do some dope.” I listened again—though I was a little frightened this time. I agreed to the Mary Jane, but nothing more.

“Do you want a smoke?” the voice continued. I did, and for the next ten years I kept listening to that voice.

Listening to the wrong voices hindered my walk with the Lord and kept me in chains when I could have been free. David was the anointed king and needed a central location for his capital. His sights were on Jerusalem. Trouble was, the Jebusites weren’t interested in giving it up. When he approached the walled city, they told him he’d never get in. But he did because he listened to a more powerful voice.

Training my ears to listen to the right voices is essential for good spiritual health. Many voices vie for my attention—most of them attempting to lead me down paths taking me further from God.

God’s voice comes through the inner presence of His Spirit and will always agree with what is taught in the Bible. Being familiar with the teachings therein is vital if I’m to hear the right voice. Listening takes a power I don’t have in myself, but a power God gives so I don’t succumb to the wrong voice. When Eve listened to Satan, she questioned God’s directive, launching her into a fall where she never recovered.

Voices of discouragement are rife—as they were in David’s day. Finding friends and acquaintances who will encourage me is important if I’m to make respectable spiritual decisions. I can find them through social media outlets, at churches, in small groups, and through good authors. These voices remind me who I am in Christ: a new creation, a masterpiece in the
making, a child of God who has worth and has been accepted into His family, an overcomer of unhealthy habits, addictions, and social mores. These voices will encourage me to seek God’s guidance in every decision I make.

Hearing voices is acceptable; just make sure you listen to the appropriate ones.