Whom Will You Trust?

As far as the east is from the west, so far has he removed our transgressions from us.  Psalm 103:12 NIV 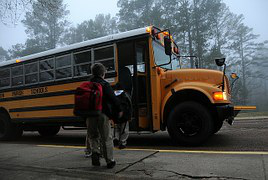 A bus ride was the place where Scott learned about trust—and forgiveness.

Scott, his classmates, and his teacher were on a field trip. Scott was eating a bag of potato chips and nonchalantly tossed the empty bag from the bus window when he finished. Within seconds, the driver began backing the bus to the place where the bag had landed.

The bus driver ordered Scott to pick up the trash he had thrown out. Scott left the bus with his head hung low and picked up the litter. When he returned to the bus, his teacher gave him some wise advice: “Learn from your mistake, but don’t let it ruin your day.”

All people have sins in their past. Sometimes their memory binds itself around the person like a heavy chain. Although they have asked God’s forgiveness, they refuse to believe He has forgiven them.

Possibly, the Lord’s advice to those who can’t believe He has forgiven them would be similar to the advice Scott’s teacher gave him. Maybe He would say, “I forgave you of those sins when you asked Me. Learn from your mistake, but don’t let it ruin your life.”

Whom we trust is up to us. We can choose the convicting voice that tells us our sin will never be forgiven, or we can choose the assurance that God has removed them as far as the east is from the west.

Trust God when He says He forgives the sins of your past.